No Generation Without Representation

Many of President Biden’s executive orders have focused on issues central to young people: climate change, education, racial justice, gun violence prevention, voting rights, and more. While these policy rollouts are a welcome sign, young people, informed by their experiences, must also be involved in the creation and implementation of these policies.
The Nation Link to Story

Growing up in a small rural, upstate New York town, I always heard that to be successful when you grew up, you had to live and work elsewhere. If you had told me, upon graduating from college in a big city, that I would instead pack my bags, send them home and take a job in the town I had left behind, I would have thought my career trajectory had gone deeply off track.
The Wall Street Journal Link to Story

Voting for the first time? Here’s everything you need to know

Over the last four years, 15 million young people have become eligible to vote in the US and they can determine the result of the 2020 election. While November 3 is still a few weeks out, the 2020 presidential election is already well underway in the US. More than 22 million Americans have cast their ballots early, shattering voting records.
VICE/i-D Link to Story

First-time Voters Could Shape This Election

Jazmin Kay, Executive Director of 18by.vote breaks down the power of Gen-Z and how they need to get involved. Saying a lot has changed since 2016 is an understatement. As all of this has occurred, many young people across the country, who have been watching this unfold and impact their lives, were reaching voting age and becoming new eligible voters.
V Magazine Link to Story

Young, Rural, and Racialized: Reaching the Most Underserved Young Voters

The coronavirus pandemic has illuminated the cracks in our voting systems. Significant limitations on in-person activities have led to an increased reliance on digital get-out-the-vote efforts, online voter registration and mobilization tools, and digital voter resources and information. While many would assume that digitally native young people would be well situated for this COVID-19 imposed shift, the existence of digital tools alone will not automatically increase youth voter turnout unless coupled with accessible information and outreach. In 2018, CIRCLE found that only 10% of young people surveyed used online voter registration tools, and just 5% utilized text reminders to vote.
CIRCLE - Tufts University Link to Story

Ritika Sharma is a 17-year-old student attending Denmark High School in Forsyth County, Georgia. As social media became a rallying and organizing outlet for thousands of students in the wake of the police killing of George Floyd, Sharma began sharing information on her personal Instagram about the racist past of her home county and the need to reform Georgia Studies, a mandatory eighth grade course across the state, to reflect this history. Soon after, in response to her posts, an Instagram account called “educationforequalityusa” sent her a direct message encouraging her to start a petition demanding changes to her school’s curriculum.
Mic Link to Story

How the pandemic suppressed student voters in primary elections

Many young people were forced to leave university and returned home to missing absentee ballots, bureaucratic hurdles and long lines, making it nearly impossible to vote. Young people hold a significant amount of electoral power in the US. Yet, they vote at lower rates than older generations, with only 22 percent of 18 to 24-year-olds voting in the most recent midterm election.
VICE/i-D Link to Story

With Covid-19, We Need to Rethink the Youth Vote

Despite being the largest, most diverse generation in history and a projected 37 percent of the 2020 electorate, young people could have disproportionately low voter turnout in the coming election.
The Nation Link to Story

6 ways to stay civically and politically engaged during a pandemic

COVID-19 has impacted almost every aspect of young people’s lives from attending school and socializing, to financial stability and more. While the future appears unclear, we should not become complacent in advocating for the issues that matter to us as the novel coronavirus continues to illuminate failures in our political systems in regards to health care, family leave, economic and food justice, just to name a few.
VICE/i-D Link to Story

young people are protesting, but they need to vote

These youth-led organizations are hoping they can inspire their peers to hit the polls. Last month, the Global Youth Climate Strike made history as nearly 4 million protestors took to the streets, making it the largest climate strike ever. Young people of all ages skipped school and raised their voices to demand action from their government, corporations, and other entities who have not stepped up to address the climate crisis.
VICE/ i-D Link to Story

So you went to the strike, now what? Here's how you can keep fighting for climate justice. Last Friday, millions of young people around the world made history as they took part in the global Youth Climate Strike. While the crowd sizes are still being determined, it is estimated nearly 4 million people in over 150 countries participated in the strikes, making it likely the largest climate strike ever.
VICE / i-D Link to Story

Jazmin is a writer and youth voting rights activist. She is Executive Director of 18by Vote, a youth-led non-profit organization that aims to help teen voters understand how to vote, when to vote and why to vote that has reached over 1.3 million young people. Her writing and personal essays have been published in The Wall Street Journal, HuffPost, MTV, Seventeen Magazine, VICE, i-D, Rookie Magazine, The Nation, Fast Company, Mic, The Center for American Progress, and The U.S. Department of State Official Blog and The White House Blog under President Barack Obama. She has been featured on the TODAY Show, BBC World News, Good Morning America and in The Wall Street Journal, CNN, CBS News, Shondaland, Teen Vogue, and more, frequently commenting as a youth voting expert. Jazmin recently graduated summa cum laude from The George Washington University with a B.A. in Political Science with Special Honors where is was president of the largest, most-active College Democrats in the nation and served as National Press Secretary for College Democrats of America. She is a two-time New York Women in Communications Scholar and was named the 2018 Hearst Magazines Scholar. 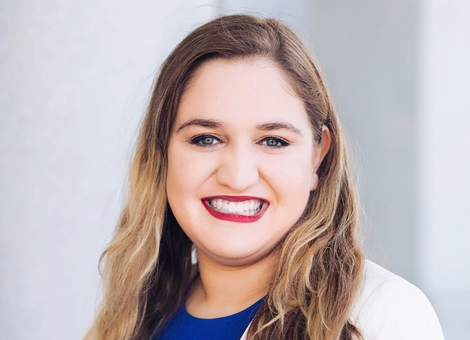